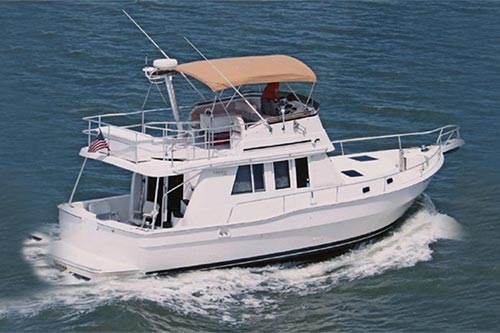 Trawlers are most often offered in lengths ranging from 35 to 60 feet long. Most are built for long term cruising of regional and worldwide destinations. They can be home for between 2 and 8 persons for many days and can be used as a permanent home whether at anchored or in a marina.

Usually trawlers have a single engine, though twin-engine installations are also available. They have a large fuel capacity. Fuel range is normally 1,500–3,000 miles on smaller vessels. When combined with the slower speeds of a displacement hull, these features give such vessels far greater range and economy than similarly sized planing boats

A large engine room under the main cabin is another feature of true cruising trawlers. Many also include a diesel generator of 5–20 kW to power domestic appliances, bow thrusters, dinghy cranes, and similar equipment.